Let us take a deep dive into some of the concepts involving the cryptography under the hood which enables the confidential transfers.

For a detailed explanation of the delegated Schnorr protocol, check this page

The cryptographic commitments are perfectly hiding, which makes them distinct from encryptions. They do not contain any information that can be decrypted by someone with a key. Rather, they serve as a hidden fingerprint for the committed information, similar to how a server can send a hash of a file before sharing the file. The hash is a unique fingerprint that can be measured from the file, but the file cannot be obtained from the hash. Cryptographic commitments can only be “opened” or “unblinded” given the unique information that was committed and a secret value called the blinding factor. If C is a commitment to a message m using blinding factor r, then C can be uniquely computed from m and r, and the knowledge of r is proof that C was a commitment to m. In Findora’s blinded asset records, the blinding factors are shared with the new asset owner (i.e. transfer recipient) using a method similar to a Diffie-Hellman key exchange. This user derives the blinding factors from blind share and its private key corresponding to public key. The user needs these blinding factors in order to check that the decrypted contents of the record are correct (i.e. as approved by the validators) and will also need to use them to transfer ownership of the asset in a future transaction.

As before, let G denote the Ristretto group, i.e. the group of points on the Ristretto curve. Let p be the order of this group. For independent group generators g1​,g2​,h∈G and a pair (a,b)∈Fp2​ representing the asset type and amount, the commitment to this pair is given by g1a​g2b​hr where r is a random element in Fp​.

The range proofs are derived from a zero-knowledge proof scheme called Bulletproofs. This is an instantiation of a special class of range proofs where the sender proves in zero-knowledge (i.e. without revealing any other information about the transaction) that the masked (or committed) amount falls within a certain range. In particular, a sender can use this scheme to prove that the amount he sent is non-negative and does not exceed his balance, which is necessary to prevent double-spending on the chain. This is a transparent scheme, meaning it does not require any preprocessing phase or trusted setup. The security of Bulletproofs relies on the hardness of the discrete logarithm problem in elliptic curves, which is one of the oldest and most battle-tested assumptions in cryptography.

We first describe a straightforward albeit inefficient way to create a range proof. The Prover decomposes the integer representing the amount into its binary representation. He then creates commitments to each of those bits and then sends a proof attesting to the claim that each of these commitments is to a bit and that the amount is the aggregation of these bits. But this proof size is linear in the bit length of the amount, which is quite inefficient in practice. Bulletproofs is an efficient range proof which is logarithmic in the size of the amount. The core of the bulletproof protocol hinges on a technique called the recursive inner product argument.

Check this link for details on the Bulletproofs-based mixing protocol

In other words, this shows that the n entries of aL​ represent the bit decomposition of v.

For randomly generated challenges y,z∈Fp​, it suffices to show that,

A confidential transaction can - and usually does - have multiple associated Pedersen commitments to (asset type, amount) pairs. To prove the so-called amount-sum equality, it is necessary to verifiably reveal which of the commitments correspond to the same asset type, without actually revealing this asset type. To show that two Pedersen commitments C1​=g1a1​​g2b1​​hr1​, C2​=g1a2​​g2b2​​hr2​ are such that a1​=a2​, it suffices to show that the quotient C1​⋅C2−1​ is of the form g2x​hy for some x,y known to the Prover. Using an aggregation trick, this proof can be kept constant-sized when the Prover needs to show that the asset type committed in C1​ is the same as the asset type committed in C2​,⋯,Cn​.

Given input commitments C1in​,⋯,Cmin​ and output commitments C1out​,⋯,Cnout​ verifiably corresponding to the same asset type, a Prover shows that the input and output amounts sum up to the same value by proving in zero-knowledge that the element C:=(∏i=1m​Ciin​)⋅(∏j=1n​Cjout​)−1 is of the form g1a(m−n)​hr (or g1a(m−n)​g2fees​hr in case the asset_type is FRA) where r is some integer known to the Prover and a is the common asset-type committed in the commitments Ciin​, Cjout​.

To prevent double-spends on the blockchain in tandem with maintaining confidentiality, it is necessary for the sender of a transaction to prove in zero-knowledge that the amounts committed are all non-negative. This requires a zero-knowledge range proof to convince a Verifier that the amounts are non-negative. Findora's confidential transfer is accompanied by proofs that the committed amounts lie in the range [0,264−1]. These proofs are constructed using the Bulletproofs scheme.

During the verification of confidential transfer at the validators' end, the validity of the XfrNote is checked. This is done in batches to increase the efficiency. The following is the hierarchy of the steps: 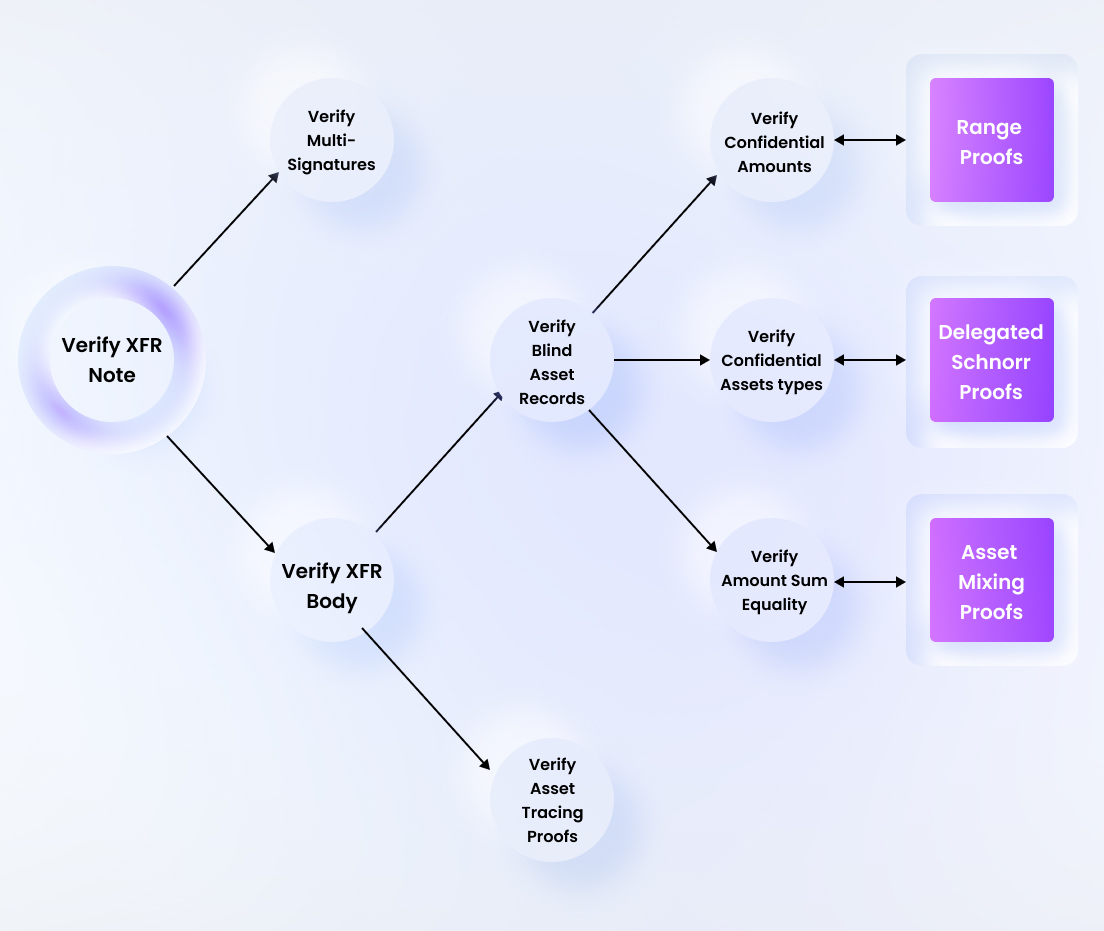 For the equality of committed asset types, the Verifier's task boils down to verifying Schnorr proofs of knowledge of discrete logarithms. The proofs are batched so that the communication complexity and the verification time stay constant.

To verify the range proofs, the Verifier performs a sequence of inner product checks. The Verifier uses the same hashing algorithm as the Prover to get the independent group generators in G. This makes his runtime O(n).