A Blind Asset Record (called as BAR) is used to issue and transfer assets and is the basic building block of the non-anonymous payments on Findora network's UTXO chain. This means the owner of a BAR is not anonymous, but merely pseudonymous, similar to most of the open blockchains in existence. BAR is a data structure that is composed of the public key, amount and the asset type. In the case of confidential payments, the amount and asset type could be hidden but not the public key. So for the purpose of anonymity and hiding the identities from the ledger, we need another data structure and that is the Anonymous Blind Asset Record (called as ABAR). ABAR is a data structure which only contains the cryptographic commitment to the amount & asset type, and this commitment lies on a dense merkle tree as a version verifiable accumulator.

To perform an anonymous transfer, we need to possess an ABAR either by receiving it from another sender or by converting a BAR that we own to an ABAR. This step of converting the tokens/coins from BAR to ABAR can be done using,

The unspent status and the owner's public key of a BAR lies on the public node as a set and is derived by replaying all the transactions. When a BAR is spent to create ABAR, we provide the integer id of the BAR (TxoSID) and a signature corresponding to the public key on the ledger. The equality of the amount and asset type in the BAR and ABAR is proved separately. The ABAR is associated to a spending key, which is a private key that can be used to spend ABARs sent to its corresponding public key. These set of keys required for the anonymous transfers are represented with an Anon Keys data structure. 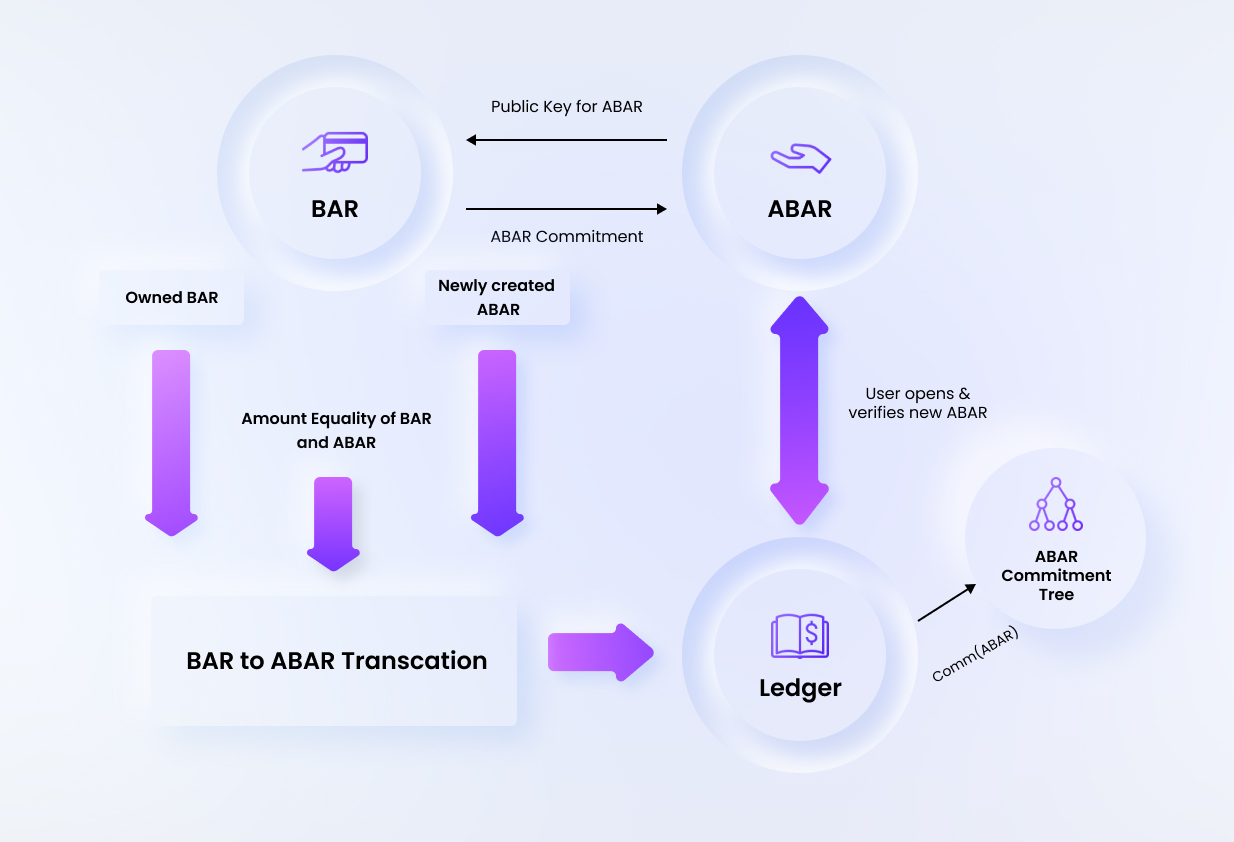 The BAR to ABAR operation generates an ABAR along with a transaction id (called ATxoSID) which is similar to TxoSID for BAR. This operation returns the commitment which is further used as an identifier in future spend their ABARs. The Findora wallet application takes care of this part and shows the updated balance in the anonymous wallet automatically, but if CLI is used, the ownership of the ABAR can be confirmed by opening the ABAR, which is essentially opening the commitment with the Anon Keys. This opened ABAR consists of amount, asset type, axfr public key, owner memo and the merkle root value.

ABAR to BAR conversion is nothing but spending an owned ABAR and generating a new BAR. We need to present the commitment of the ABAR, the Anon Keys and the keys for receiving the BAR. The ATxoSID obtained from the unique commitment exposes which ABAR is being spent.

This spending of the ABAR is similar to that of an Anonymous Transfer i.e., a zero knowledge proof is generated to prove,

The existence and ownership of ABAR is proved with the knowledge of the secret key and the correctness of the merkle path of ABAR in the commitment tree. The network verifies the proof with the merkle root and the exact spending of the ABAR remains a secret. To ensure that there is no double spending involved, the spender creates a nullifier hash from the amount, asset type and the Anon keys, to track the spending status of ABAR. The Nullifier Hash cannot be correlated to any ABAR in the commitment tree by an external party so only the ABAR owner knows its spending status. The nullifier hash is stored in another tree (called the nullifier set) to track the common set of nullifiers, signifying all the spent ABARs in the network. The correctness of the nullifier hash is proved in zero knowledge to not allow anybody to forge a Nullifier. 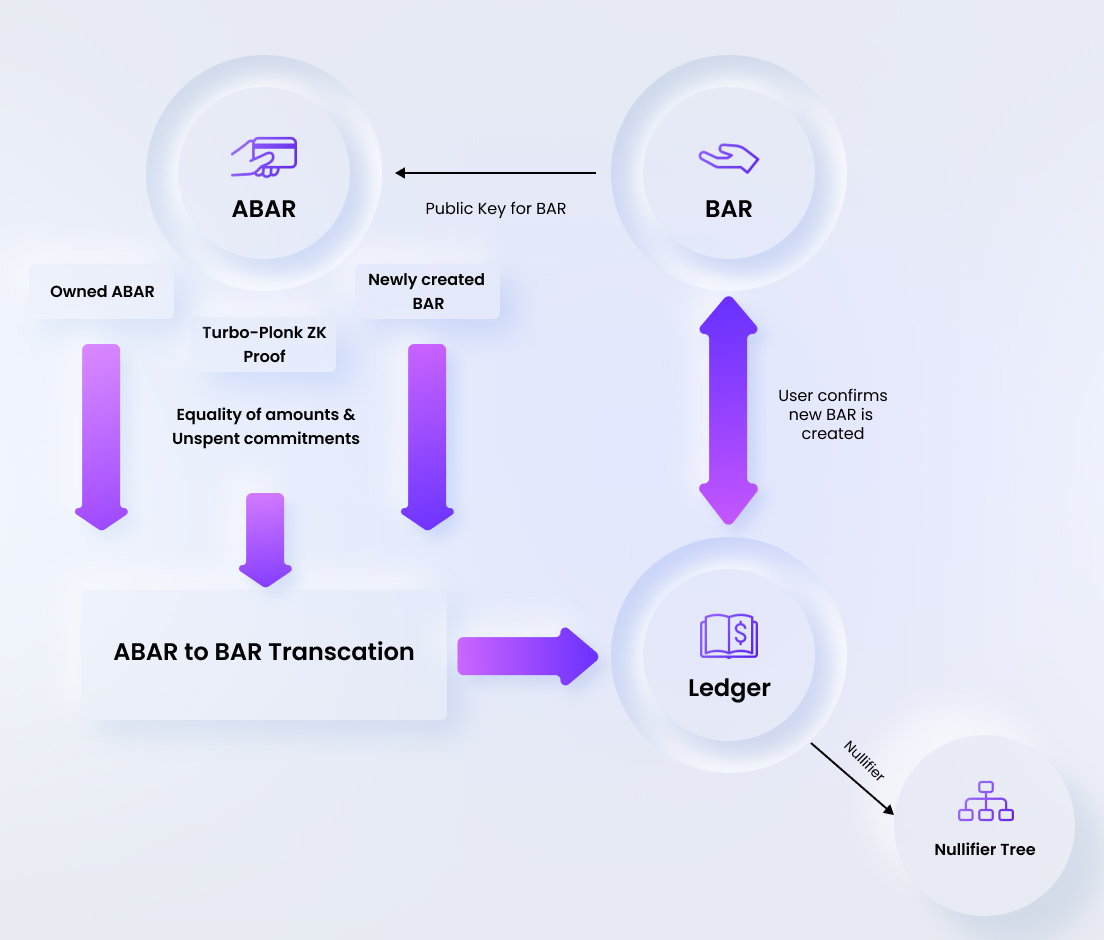 This operation returns a new BAR with the same amount as that of the ABAR. Optionally, the amount and asset type could be made confidential while generating the new BAR. However the public key of the BAR is not anonymous anymore, hence the ABAR to BAR conversion assumes a loss in anonymity for the transfers made any further using the newly generated BAR.

Findora uses the increasingly popular TurboPlonk instantiated with the Kate/KZG polynomial commitment scheme as the zk-Snark that enables this mechanism. Plonk is a pairing-based Snark with a universal and updateable trusted setup whereas TurboPlonk is an optimization of Plonk with customized gates. While making an anonymous transfer, an ABAR record is spent and a new one is created addressed to the new owner. The spender of the ABAR presents a zero knowledge TurboPlonk proof of the existence and ownership of ABAR, that all of the following hold except with negligible probability,

For each ABAR input:

For each new ABAR output: 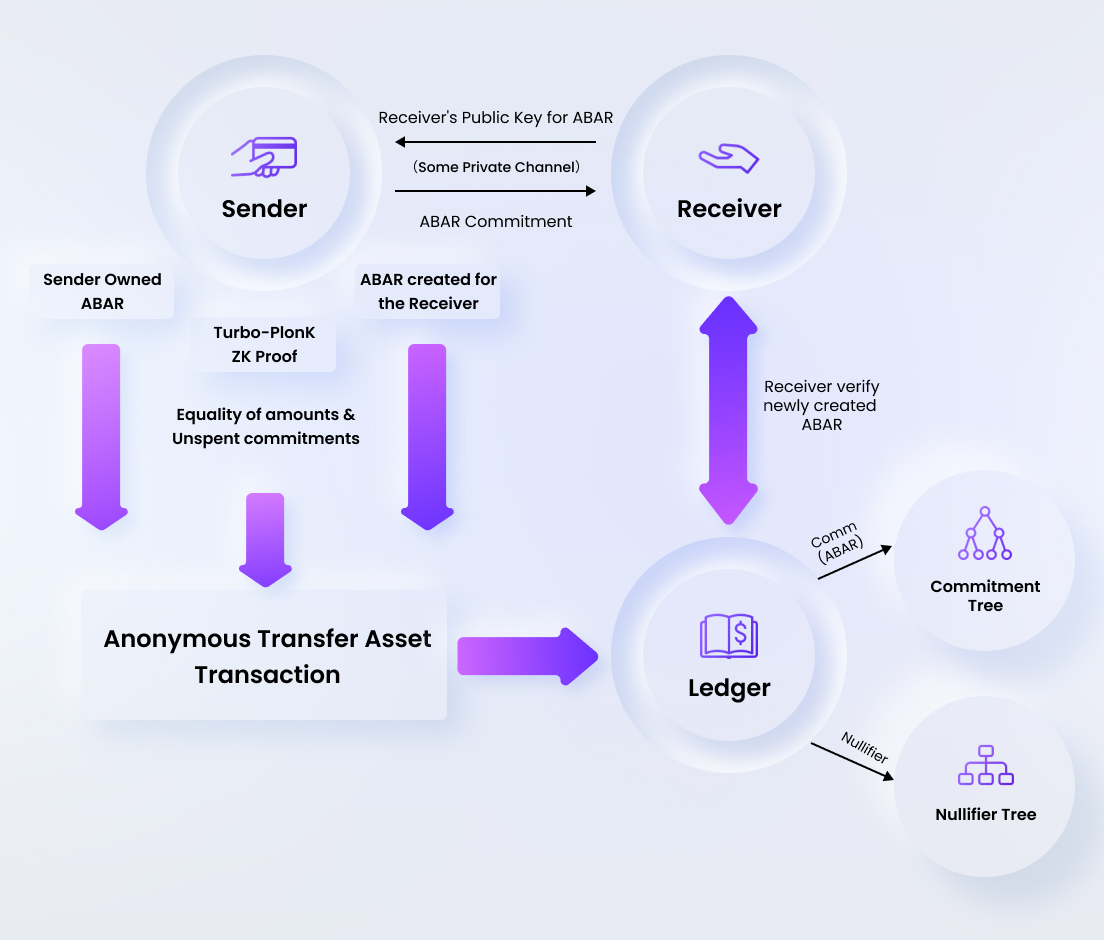 Sequence of steps in ABAR Transfer​

Note - Findora Wallet eliminates the need for commitment sharing and does the querying of the received ABARs automatically in the background by trail-decrypting the all new anonymous transactions periodically. The commitment, as discussed in previous sections, is only an identifier and the alternate way to identify anonymous transactions is to use the ATxoSID which is serially incremental in nature.